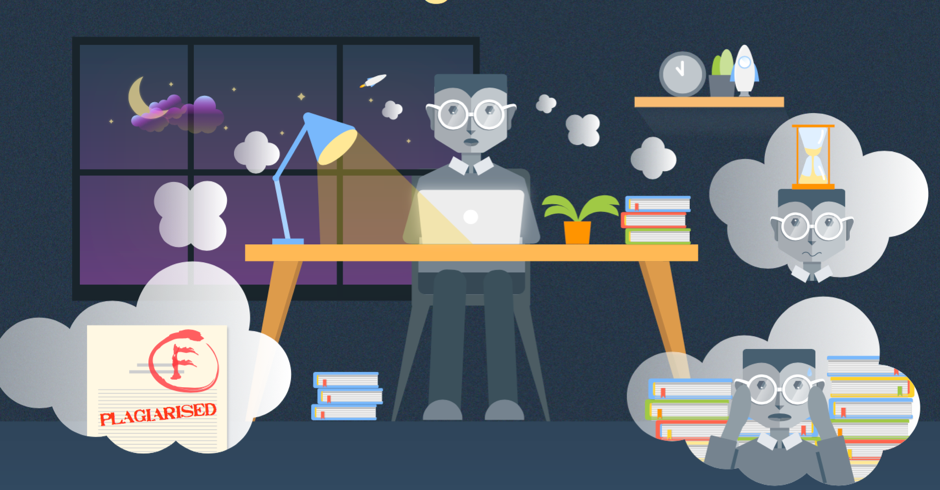 Click on the image to open the full data visual.

It’s clear that accurate referencing has a great impact on students’ success at university. Referencing is a fundamental exercise in academia and, with increasing abundance of readily-available information today, the importance of ‘giving credit where credit is due’ becomes all the more significant.

At Cite This For Me, we wanted to dig deeper and discover what students thought.
We conducted a survey to find out if referencing was a concern for students, how knowledgeable they were, and their attitudes towards plagiarism in general. The results were illuminating.

1.  The majority of UK students are concerned about their referencing

Of the students surveyed, 78.4% agreed when asked if they were worried about referencing correctly.

2.  1 in 2 students had lost marks for referencing incorrectly

The fact that so many students are worried comes into perspective when you consider that half of the students reported that they had lost marks for referencing incorrectly in their university assignments.

3.  What were the most common referencing errors?

4.  One-third believe they could not lose marks for plagiarism

Students have a range of ideas about what might be in store for them if they are caught plagiarising. Although many were aware of the most common consequences, with 77% identifying suspension/exclusion, a staggering 34% were unable to identify losing marks as a potential consequence:

5.  Over 71% are fearful of facing disciplinary actions for plagiarism

6.  Almost half of students reported a lack of information provided about referencing

Of the students surveyed, less than half agreed when asked if they felt they had received enough information about referencing while studying.

7.  Over half were wrong or unsure about whether to reference common knowledge

The findings exposed a high degree of uncertainty around the recommended practice around referencing. Less than half of students surveyed were able to identify that they were not required to reference common knowledge; e.g. ‘Winston Churchill was English.’

8.  More than 20% were unable to identify that ‘ghost writing’ constitutes academic misconduct

Although 4 out of 5 students were able to identify that paying for someone else to write your essay for you constitutes academic misconduct. Surprisingly, more than 20% were unable to identify this as plagiarism.

Although a small number of students were not aware, the survey found that the majority of students understand that they need to reference information copied from a publically available website.

10.  Students are turning to technology to avoid plagiarism

The survey exposed some potential cause for concern around student’s attitudes to the topic. One of the most staggering findings was that over 70% of respondents said they are fearful of facing disciplinary actions for plagiarism, noting a lack of awareness surrounding useful resources and confusion around how to reference as the main reasons. This was unsurprising when you consider that 50% said they had lost marks on university assignments for referencing incorrectly.

Of the Non-Cite This For Me users surveyed 64% said they worry that they are not referencing correctly. This was compounded with the technical questions around students’ knowledge about good referencing practice and their perceived repercussions of plagiarism, which found that many are less-informed than they ought to be on the subject.

Given a lack of knowledge and the fact that Higher Education institutions typically demonstrate a strict no tolerance policy for plagiarism, it may not be unsurprising that so many have lost marks. But, we’re curious, could this be avoided?

The students think so…

Of the students surveyed, over half felt they had not received enough information about referencing while studying.

But, is it the universities’ fault?

It’s true that referencing is a difficult skill that takes time and dedication to master. With increasing source types like the websites, podcasts and tweets that have been brought about by the digital revolution, there is so much more to know. Maybe that the time has come where understanding and, in turn, teaching around referencing has become too complicated to address in the traditional sense.

Given that advances in digital technology have been a significant driving factor in the increasing complexity around referencing, it seems intuitive to also look at technology for the solution.

Cite This For Me is the world’s most accurate citation tool, creating and formatting citations in over 1,000 styles, including the most common: Harvard referencing, APA referencing & MLA referencing. The reference generator and browser extension along with the iOS and Android apps help students throughout their research journeys to ensure that they are citing correctly and avoiding plagiarism.